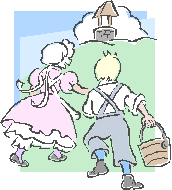 She just stood there shivering, holding the empty pail.  Her drenched hair and clothes were making a large puddle.  She didn’t seem to care.  Then her lips trembled and her throat quivered like she was going to say something, but she made no sound.  Still, I heard her mournful voice, demanding answers:  Who is she, Jack?  Who is Sally?  Did you tell her about us, Jack? ”

“You’re not really here,” Jack said.  “You know that and I know that.”

“Then why are you talking to me, Jack?” she chortled. “Tell me,” she demanded, “who is that woman?”

“She’s just a friend.  Now go away; I’m tired of talking to myself,” Jack said to she who once was the woman of his dreams.  Now she is the woman of his nightmares.  He took another Halcion, washing it down with the Stoli he kept in easy reach on the nightstand.  He had to get some sleep.

They met as children, in the village where they both attended school.  He was the new boy, transferring in during the middle of the year.  Most of the other kids ignored him, but not Jill.  She smiled shyly whenever she saw him, off-handedly saying, “Hi, Jack.”

“Hi, Jill,” he would invariably reply, unsure what else he should say.  As school days came and went, the months passed into summer.  By then, Jack and Jill had found more to say.  While other boys were outside playing baseball, Jack was often visiting Jill.  They talked of their favorite subjects at school.  They talked of books read and movies seen.  They played games as well; Jill had a dual station VR jack right in her room.  There came a day, much like any other, when Jill paused after the end of one game, to ask, “What do you want to be when you grow up, Jack?”

“A doctor.  I want to help people—to make sick people well,” Jack quickly replied, sounding very sure of his answer.

“What a great dream, Jack!  You know, I always wanted to be a nurse.  But now that you mention being a doctor, why shouldn’t I be one too?” Jill said, smiling brightly.

“You’re right Jill, no reason you couldn’t be a doctor too.”

“Maybe we could get some practice at being doctors right now, Jack.  You could examine me and I could examine you!”  Jill said, excitedly.

“Uh, what do you mean, Jill?”  Jack said, a puzzled look passing over his face.

“Wouldn’t you like to see what’s under here, Jack?”  Jill said, lifting the skirt from her pale white thighs.

“Uh…, well, uh…Yeah, sure!”  Jack said, nervously at first but then grinning widely.  “But what about your mom?”

“Don’t worry, she won’t be home for a couple of hours.”

So it went, Jack’s introduction to female anatomy.  Nothing much came of it then, fortunately for them both.  Neither knew enough about sex to take things beyond exploration.  It wasn’t long after playing doctor that the accident happened.  At least everyone thought it was an accident, at first.  Jack fell down and broke his crown.  Still, as anyone with common sense would know, you don’t go uphill to fetch a pail of water.

That’s the story a sopping wet Jill told Jack’s mother, there in his room.  With Jack lying in bed moaning, Jill said,  “We went up the hill, you know, out behind the last house.  We went to fetch a pail of water.  Jack stumbled and water went splashing all over me.  I, uh, thought he did it on purpose—so I kind of pushed him.  I didn’t mean for anything to happen!  He dropped the pail and it started rolling toward the edge of the hill.  He ran after it but I guess he slipped on the wet rocks.  I was so scared when I saw him fall!  I tried to pull him back but it was too late and I went tumbling after him.  I guess I fainted or something.  When I woke up, Jack was gone.  I picked up the pail and ran over here.”

“How did Jack get here?  What happened to his head?  Explain that to me!”

“I don’t know how he got here!  He must have run home on his own. I was passed out; I guess his head hit the pail at the bottom. I am so sorry!”  Jill cried.

Jack’s head healed up, eventually. The vinegar and paper seemed a better remedy than his mother thought. Jill moved away, with her family. Everyone thought it best to put the incident behind them. Jack thought he had until he met Jill at college. She still had the sweet seductive smile. Now she had the ripe figure of a woman to go with it. She also had an odd item adorning her sweater–a gold pin in the form of a tipped pail. He should have taken it as a warning. Instead, in the surprise of seeing her again, he agreed to get together for lunch. Jill suggested making it a picnic, at the secluded hills not far from campus.

“OK; let me get carry out,” Jack insisted.

“That’s fine Jack,” she readily agreed, “but don’t worry about drinks; there’s a spring there with great water.”

Jill brought her pail. As anyone could expect, it all went downhill from there.

First published May 2014 in Eagle Peak Quarterly under the pseudonym Rudd Humboldt; slightly edited in this version