Well, it isn’t a story yet, but it could be. Needs lots of work yet. It’s so odd how the topical phrases wind up in the writing folder on the computer. This one, as so many, comes from my wife. She noted in passing after setting the plates on the table one evening that she forgot the dipping bowls. What is spaghetti without bread–bread dipped in olive oil with a sprinkle of herbs and pepper? “A good title for a story,” I said, “a mystery perhaps.” So this is it, the start at least. Don’t forget, you can subscribe to this blog and get new posts delivered in your email. 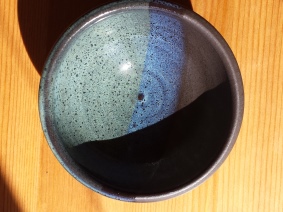 “Never seen nothing like this Sheriff. I mean, we’ve had a few drunks; a few punks taking drugs but if we find out we get ’em outta here real fast. We’re real careful who we rent to.”

“I’m sure you are, Fred. Why don’t you go out on the porch and sit down now, you’re still shaking. We can handle this in here. We got any more questions, we’ll come out and talk with you.”

The bodies were still fresh, with the cold nights of early June in central Maine. Fred, the cabin owner discovered them. The renters were two days late checking out, so he went for a look-see. Their car was still there but they didn’t answer his knock. Opening the door, he found them on the floor. Dishes and a few utensils lay near the bodies of the middle-aged man and woman. A red sauce stained the threadbare carpet, matching the remains stuck on plates and forks.

“What do you think happened here, Doc?”

“Well there’s no trauma—no wounds, no bruises other than what you could expect from a fall off the chairs. If there were just one of them, it could be a heart attack or stroke but there’s two. I don’t like to guess, Bill, you know that. It could be something they ate, from the dishes on the floor. I’ll have to get the two of them and the dishes back to the morgue. I’ll run some tests”

“Henry, where are the dipping bowls? I can’t find them anywhere!”

“How should I know, Margaret—you cleaned up the kitchen the last time we were here! Where did you put them?”

“Well, I always put them on the third shelf, left hand side. But they’re not there. What are we going to do now, dinner is almost ready. What will we put the oil in?”

“I don’t know. Does it really matter? Can’t we just put the oil in the little pudding cups?”

“Oh, I suppose; but it’s not the same,” Margaret sighed.

“We’ll survive, Margaret. The oil will be the same, the bread will be the same. After dinner I’ll have a look around. Maybe Tommy or Ellen used them for something else and forgot to put them back.” Henry had attained that age when the hair on a man’s torso, arms and legs turns brittle and thin before disappearing altogether—while vigorously growing tufts sprout from ears and nose. With that age comes patience, the tolerance of minor irregularities that time has a way of taking care of.

“All right, Henry,” Margaret said, setting the plates on the old pine table, a remnant from one of the other camps at Schoodic Lake. Known as cabins most everywhere else, many in Maine still call a cabin open only during part of the year, usually summer, a camp no matter how  well-furnished.

Doc Wilson gathered up the plates, wine glasses and utensils, pausing to look at the pale blue and gray ceramic bowls among the items remaining on the table. They didn’t match the rest of the dinnerware, but that wasn’t uncommon at rental camps. Few folks left the good stuff for the renters except the higher-end places. This wasn’t one of them. The oily residue gave off a dull sheen, suggesting the small bowls were used for dipping bread. Only a lab test could confirm what the bowls had contained. Doc bagged them separately, so as not to transfer any substance from them to the other items.

Review of On Tyranny, by Timothy Snyder

Book Review: The Voyage of the Lanternfish