“Care granted to the sick, welcome offered to the banished, forgiveness itself are worth nothing without a smile enlightening the deed.”

So says Antoine de Saint-Exupery in Letter to a Hostage. Maria Popova has a wonderful piece about the short-lived author (1900-1944) of The Little Prince in her Brain Pickings site. While a journalist covering Spain’s civil war, he was captured by a group of anarchists. He feared death at their hands but they seemed less violent than bored. Popova’s excerpts begin with the blockquote above. She details how he survived this incident. Asking for a cigarette from a captor with a simple smile and a hand gesture sufficed. You will be gladdened and saddened at your reading of the full post. If you aren’t familiar with her site, you will want to read more.  Over how many millennia did we humans evolve the effect of the smile–which we perhaps learned from our fellow primates?

Spring Continues Its Bloom of Life 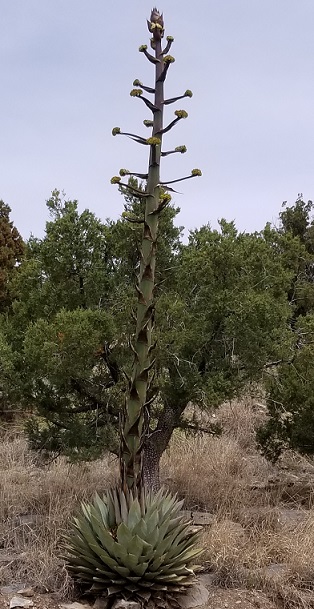 On April sixth, I shared a photo taken on March 27th–an agave beginning its ascent. Four weeks later it reached a peak of nearly 14 feet. Now its pods are popping out from the center stalk. First they must ripen. Then their golden blooms will appear. The base of this particular mystical plant is challenged. Leaf blades were already dying before the stalk began climbing. Bites from the local herbivores left chunks in the leaves. The base hung precariously on a ledge cut more deeply by a mason for a wall made from the limestone. From where does the enormous stalk come–and so quickly? The roots are shallow. We get an average of 16 inches of precipitation per year here in southwestern New Mexico. It’s certain the stalk doesn’t grow below and then rise up fully formed.

It is the insentient will of these succulents to send towering beauty into the air. A stalk with sweet, juicy pods that nurture birds, bees, insects, deer and elk. Leaves that feed cattle and the same deer or elk. Such a powerful expression of life–of overcoming adversity. It will bloom just once. It then will die. But it’s memory lingers and serves as inspiration to us humans. Don’t give up–show what you are made of. Here’s a picture from today. Compare it to 4 1/2 weeks ago.

4 thoughts on “Spring Soon Becomes Summer and WATWB for April”