Last Thursday, September 21st, I posted an item commemorating the 50th anniversary of my arrival in Vietnam on Views from Eagle Peak. It’s no coincidence that the Ken Burns and Lynn Novick series about the Vietnam War began and continues on PBS overlapping that anniversary. If you haven’t yet seen it, go to the PBS site to see more information about the war and the series. It contains interviews with more than 100 individuals involved with the war–on all sides. I wasn’t among them, but this September also marks the tenth anniversary of my publishing a memoir which prominently features my experiences in Vietnam. The series and my book are complementary.

In the Buddhism I practice, there is no such thing as coincidence. There is causality–cause and effect. A long-time leader I know within our lay organization prefers the term anagogical (no doubt stemming from his former Catholic background) to describe what fellow Buddhists often describe as mystical phenomena. His term is more precise, reflecting the unseen connections between events. Such is the case not just with the timing of the PBS series but with events in my life from childhood through Vietnam. My experiences in Vietnam destroyed innocence and shattered illusions but ultimately led to my practice of Buddhism ten years later–in 1977. Waiting for Westmoreland reveals how Vietnam led me to Buddhism. It also explains how my childhood led to behavior in Vietnam that formed causes that produced life-threatening effects. 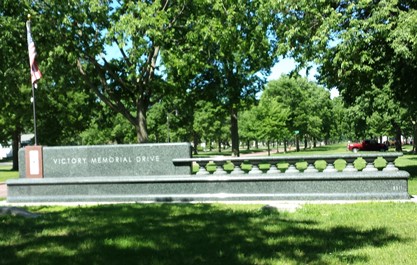 Watch for a feature on these two anniversaries in the October edition of Eagle Peak Quarterly. In the meantime, as promised in that Thursday post on Views from Eagle Peak, here’s another excerpt from WFW.

7 thoughts on “Victory Memorial Drive–Where I Grew Up”