It’s an early spring for plants, birds and more. A cold and dreary winter in southwestern New Mexico has yielded to warmer weather and growing things. The first agave began popping up on a precarious ledge in late March. This photo is from the 27th. Despite its challenged base, it will be large–probably fifteen feet and three inches in diameter in four to six more weeks.

A whole crop of astralagus are spreading near are patio. They’re volunteers that perhaps arrived on the wind last year or before. One of a very small cohort of New Mexico plants that won’t hurt you if you mistakenly touch them. Their leaves are not only soft but the blooms are beautiful lavender. Unfortunately for ranchers, they’re also known as locoweed–not good for horses or cattle who might munch on them. Ours is within or fenced area where they will do no harm for all but the deer or the rabbits. 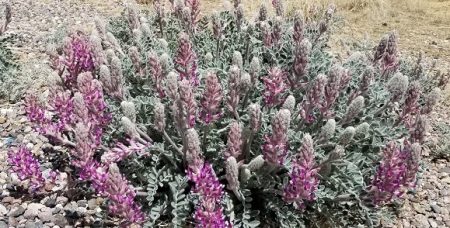 A few bees have already been visiting this and its fellow plants. Also a hummingbird has checked the flowers already, but found them not yet ready for sipping. Moths and butterflies are showing up in small quantities so far. A couple lizards have been spotted on the stucco walls of our house. We’re hitting the sixties and even the seventies on a few days. Yes, spring has sprung. The grass will not rise, at least not fescue or bluegrass–we have neither. We have bear grass, yucca and other varieties of more arid species that grow wild here. We cultivate nothing–nature provides enough colorful plants. The cacti will bloom later–barrel, cholla, prickly pear and more.

3 thoughts on “Spring Has Sprung”