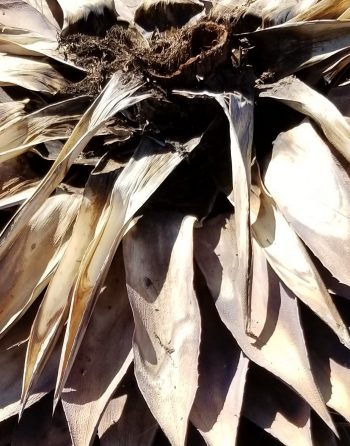 Fifteen long years had passed. Years of sunny days, windy days. Cold wintry days, some with leaf-blade-coating snow. Hot days without a drop of rain. Only the moisture stored in fat, succulent leaves sustained it and its neighbors. Still, it was not yet time. The sharp spear-tipped leaves grew taller and wider, outward from the once tiny core. A core that emerged from the rocky limestone soil as a bud no larger than a human thumb.

Now five feet across and three feet high it grew proudly, awaiting the day it would bloom—before dying. Not yet, maybe next year—maybe two, three or more years from now. The center knew but kept its secret. Serrated edges kept some herbivores away, but the tough-tongued cattle left a few wedge-shaped bites on outer blades. The agave sealed the wounds, leaving a papery edge.

Finally, more seasons than it could count—if it were able to, the stalk began rising from the core. Inches day by day it rose. A foot or more each week until it crested at seventeen feet. A bit shorter than some but taller than others. Pods appeared. A few weeks later they opened, their sweet nectar drawing all near. Deer, elk, birds, bees, ants and more delighted in the agave’s offering. More weeks went by and the pods went dry. Flowers fell, replaced by seeds.

A slow death began. The plant had given its all to nourish the blooming stalk, whose seeds would in time grow into progeny. It dried over time until only burrowing insects visited the stalk, followed by the woodpeckers—who pierced the decaying shaft. The entire plant dried, fading from green to dirty white in death. A few years later, the man came. The man pushed and pulled the stalk, hoping to hasten its fall.

My stalk, my roots and my leaves are one. We all fall together, when our time has come. Some might believe it mindless, but the plant lived by its code. The man persisted, breaking the stalk free. He paid in blood for his crime, falling forward across the agave with the stalk in hand. Drying, dying but still-sharp shards remained that pierced his flesh. He limped away in red-soaked jeans.

2 thoughts on “The Angry Agave”